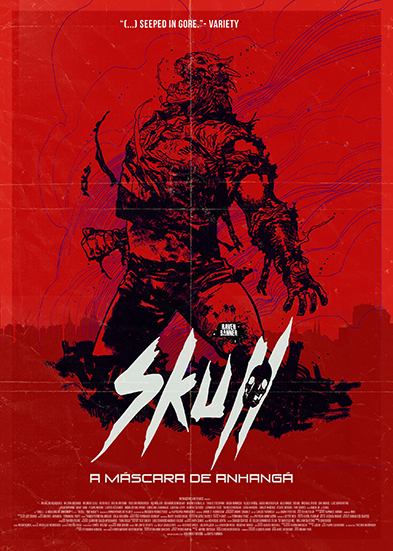 Skull: The Mask arrives on Shudder in the US, Canada, UK, and Australia/New Zealand on May 27th

For the most part, the slasher film is an American genre of horror. That’s not to discount the great slasher films from other countries out there. Films like High Tension and Cold Play have brought the subgenre to other countries, to say nothing of the influence that giallo and splatter films had on slashers. But the vast majority of slasher films – the good ones and the bad ones — hail from the States.

In comes Skull: The Mask to help balance that out a bit. One of the standout midnighters from last year’s Chattanooga Film Festival, Armando Fonseca and Kapel Furman’s Brazilian noir slasher makes its way to Shudder this week, bringing lots of bloody mayhem and more plot than it knows what to do with.

The film kicks off with a bang, as Nazis discover an ancient artifact in the Amazon and attempt to harness its power. The artifact in question is the Mask of Anhanga, described in the film as the executioner of the ancient (fctional, as far as I can tell) god Tahawantinsupay. When the experiment goes head-splatteringly awry, the mask is lost to the world until the modern day, when an archeologist (Ruiz) uncovers the mask at a dig and brings it to Sao Paulo in Brazil.

The mask is intended to go to a nefarious Chinese conglomerate headed by the unnervingly unscrupulous Tack Waelder (Muller). However, the mask has its own designs and finds itself a host, leaving a trail of eviscerated bodies in its wake.

Disgraced police officer Beatriz Obdias (Rodriguez), who was suspected of dark deeds involving a missing children’s case, is put on the case and must navigate Waelder’s desires and her own responsibilities as a cop. The situation is complicated further by a man with a connection to the mask (Andrade) and his mentor (Gelli), a priest who is skeptical that the mask is behind the killings.

That’s a lot of characters, and the way that Fonseca & Furman fold them all into the story is a bit clunky. Their script is more ambitious than their budget and running time; there’s simply not enough time in 90 minutes to accomplish everything they want to do. As a result, we have a couple of genres colliding with each other in ways that come off as less than smooth. One side has Beatriz’s investigation as a hard-boiled noir story, while on the other side you have the Skull (Brazilian Wrestling Federation’s Rurik Jr.) getting bloodier and bloodier in a gore-filled urban slasher flick. The self-serious nature of noir doesn’t mesh well with the craziness of the slasher elements.

To compensate for this, Fonseca & Furman layer over the whole thing with an aesthetic right out of the 1970s. There’s a grit to the whole look of their Sao Paulo, mixed with some trippy elements that feel straight out of a Corman-era genre B-movie. It’s a bold move that smooths the abrupt juxtaposition to a degree, though it also makes the more banal elements stand out more.

The two sides are not equal, with the noir side suffering in comparison. There’s just too much to tackle and it’s undeveloped to the point that whenever it cuts away to this element, the tedium builds. That’s not the fault of the cast; the performances are fine, with Rodrigues’ hard-boiled permascowl selling her role decently. Muller makes a fine villain, leering and creeping his way through his role as the CEO of a company that can easily serve as a stand-in for any number of foreign interests insinuating themselves into a position to exploit Brazil’s history and natural resources.

There’s some very unsubtle political allegory here – it’s easy to note that the corporation’s logo looks like an SS, implying that they’re no better than the Nazis who started the film off. There’s too much going on for the allegory to be developed particularly well, though some of the points are made because they’re so overt as to be difficult to miss. They don’t land with the impact that they probably should, which can be a problem when you’re trying to do so much with limited time and money.

The other, nastier (and sillier) side is what will likely satisfy the strongest, because here the directors are on sturdier ground. Furman has an extensive history in special effects, and he and Fonseca really let the blood flow. There’s a number of great gore effects here, not the least of which is the Skull himself – a visceral, tentacle-wrapped monster who gets bloodier as he goes along.

As the monster Rurik gets to cut loose here, and horrorhounds will appreciate the creative kills while wrestling fans like me probably can’t help but smirk as powerbombs, uranages and Stunners work their way into the fight scenes. Add to this a priest who pulls a sword out of a Jesus crucifixion statue and the gonzo blood spurts, Venom tentacles and ribcage shatterings. It’s just the right amount of cheese to make the action a blast and give it that exploitation flick feel, something the visual look sells. It’s not pretty, but it is a delight.

That said, the biggest problem with Skull: The Mask is how compartmentalized that kind of thing is. The fun of the slasher components doesn’t extend itself over to the noir scenes. We know these two genres are going to collide, and when they do the bonkers elements wisely take over. Fonseca and Furman would have done themselves a favor to figure out how to blend the two sides together better. It’s not the most successful effort, but there’s still plenty to enjoy along the way.