An ‘overbearing and manipulative’ husband who bludgeoned his ex-wife to death as she slept with such ferocity that he caved her skull in has today been jailed for life.

Jasbinder Gahir, 58, beat Balvinder Gahir with a metal bar at her home in Lillington, Leamington Spa, after being motivated by ‘naked greed, revenge and financial gain’.

The 58-year-old launched the attack with ‘extraordinary savagery and brutality’ leaving Mrs Gahir, 54, with 17 head injuries – before blaming the murder on burglars.

IT worker Gahir, who posed as Monarch Airways pilot and ex RAF serviceman, was described as a Walter Mitty character who wove ‘a complex web of lies’.

He had launched the brutal assault on August 24 last year, after his wife refused to sell their marital home £480,000 which she had lived in following their divorce.

As he sentenced Gahir, the judge told him: ‘Your pretence was coupled with a violent and vindictive nature. Over the course of 11 years you bullied, belittled and defrauded your wife.’

Their youngest son Rohan Gahir, 23, was found guilty of perverting the course of justice after driving his father from the scene and trying to cover their tracks by burning clothing and a mat from the vehicle. 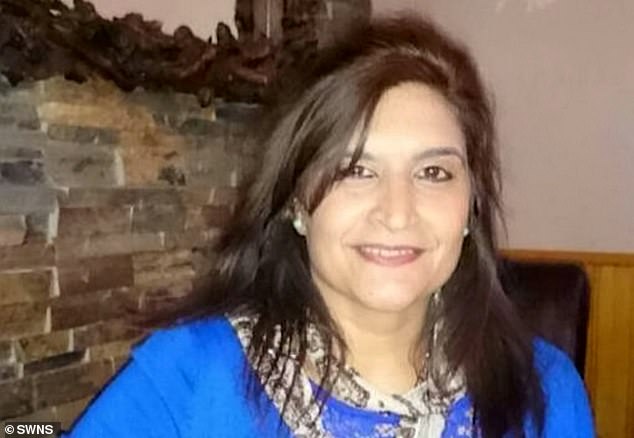 Jasbinder Gahir, 58, beat his ex-wife Balvinder Gahir (picured) with a metal bar at her home in Lillington, Leamington Spa after she refused to move out 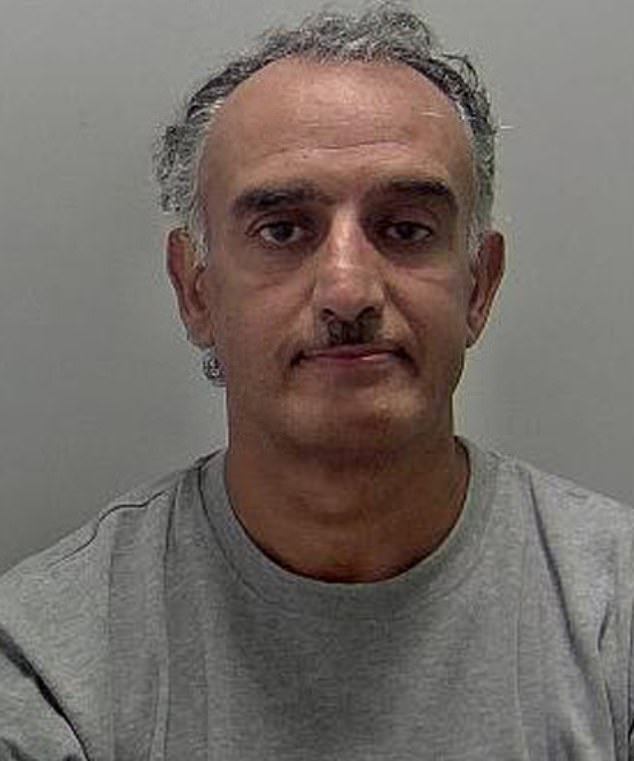 Jasbinder Gahir (pictured), 58, beat Balvinder Gahir with a metal bar at her home in Lillington, Leamington Spa, after being motivated by ‘naked greed, revenge and financial gain’ 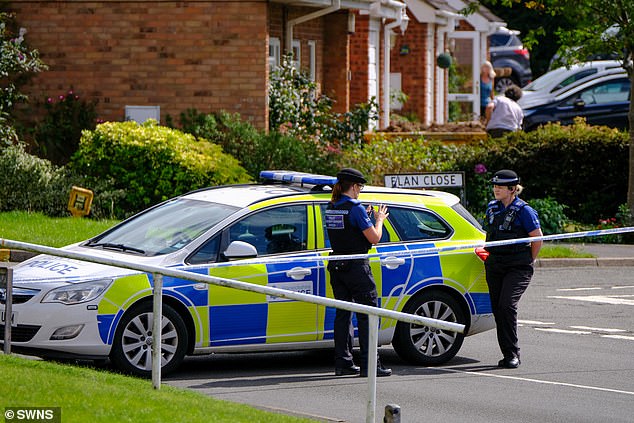 The 58-year-old launched the attack with ‘extraordinary savagery and brutality’ which left his estranged wife, 54, with 17 head injuries before blaming the murder on burglars. Pictured, police at the scene last year

The couple’s marriage broke down after Gahir remortgaged the family’s home and used part of the cash to buy a flat in Slough without his wife’s knowledge, the court heard.

The 58-year-old had put the new property in his name and took an income from rent but did not share the money with Ms Gahir.

A recorded phone call captured Gahir as he said he would attack his wife, ‘because she’s a greedy cow’, adding, ‘I worked for it all.’

He then broke into the property in the middle of the night and carried out the savage attack.

Judge Andrew Lockhart QC told Gahir: ‘You were at the heart of a section of this family that was toxic. Your motivations were plain, manipulation, money and murder. The case against you displays violence and naked greed.

‘Your life was a lie. You lived a Walter Mitty type of existence. You wove a complex web of lies. You continued with your lies right up until the moment you moved away from that witness box.

‘Your pretence was coupled with a violent and vindictive nature. Over the course of 11 years you bullied, belittled and defrauded your wife.’

Judge Lockhart said Gahir tried to get his ex-wife to give up what she was entitled to, portraying her as greedy, but she saw through his plan.

He added: ‘This was the nemesis for this terrible attack. For you, steeped in greed as you were, this was a disaster which had to be stopped – and the method was to be murder.

‘Revenge and, most importantly, naked greed and financial gain was the motive.

‘This attack was utterly brutal. You left her for dead and made your way back to the car where you Rohan waited ready to whisk him away.

‘You intended you would take the financial advantage from this in some form or another. You have not one jot of remorse for this terrible crime. This was an offence of extraordinary savagery and brutality.’ 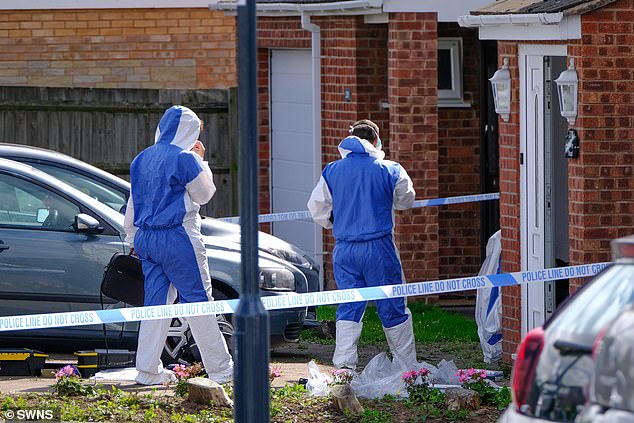 Gahir broke into the property in the middle of the night and carried out the savage attack. Pictured, forensics officers at the scene

The judge told Rohan: ‘By the time you got back to Maidenhead you knew your mother had been battered to death by your father. You chose to side with your father as he sought to clear up evidence of murder.

‘What is so very incomprehensible to any human being with an ounce of decency is that you did this to cover up the murder of your own mother, a woman you professed to love. How you will live with that is a matter I cannot help you with.

‘The whole trial might have been avoided because even your cowardly father might have decided to face up to things if the blood of your mother had been found on his clothes.’

Gahir was jailed for life to serve a minimum of 28 years for the murder of his ex-wife.

His son Rohan Gahir was caged for three-and-a-half years for perverting the course of justice.

Senior Investigating Officer, Detective Chief Inspector Caroline Corfield, said: ‘This was a shocking, cold-blooded murder, motivated by anger and greed. Our investigation revealed Jasbinder Gahir to be a manipulative, materialistic man capable of deceiving those closest to him over many years. I have no doubt that Bally’s recent enforcement of the financial order against him was the motivation behind her murder.

‘Jasbinder has never shown any remorse for killing Balvinder but he continued to weave a web of lies in the courtroom. The jury have rejected his account and we welcome this verdict.

‘I would like to thank everyone who has worked so hard on this case to seek justice for Bally.

‘Bally’s family are utterly devastated by her loss but I must pay tribute to the incredible dignity and courage they have shown throughout this investigation and trial. I hope this justice outcome can offer some comfort.’

Paying tribute to Balvinder, her family said: ‘Words will never express how losing our beloved daughter/sister, Balvinder Kaur, so suddenly has meant to us.

‘She was a remarkable, graceful, intelligent and overall charismatic beautiful lady.

‘The light of our lives, a kind and gentle soul, who portrayed nothing but warm love and happiness to all the people she met.

‘Her unconditional forgiveness and uncompromising love for her children, her family, friends and everyone she met was unquestionable.

‘Our hearts still yearn to see her one more time just to tell her how truly amazing she really was, and how much we love and miss her wholeheartedly.

‘You may have been taken away from us, but no one will ever take all the special memories you have left deep in our hearts.

‘We feel honoured and blessed to have had you in our lives.

‘Our darling Angel wherever you are, we hope you are at peace x.’