Evidence from skull central in Mark Redwine trial – The Journal 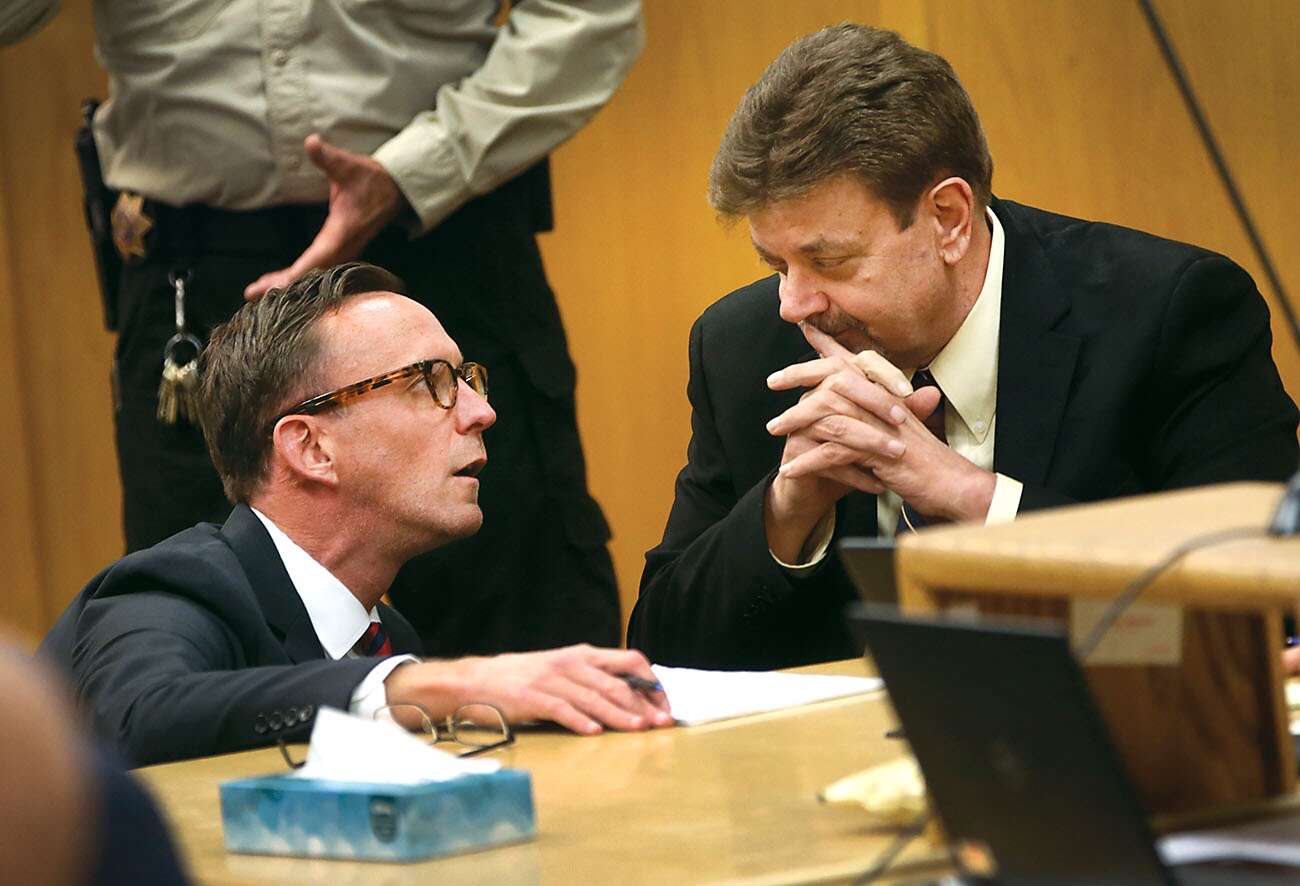 Mark Redwine, right, talks with John Moran, one of his defense attorneys, before opening statements Monday during his trial in La Plata County. Redwine is charged with second-degree murder and child abuse resulting in the death of his son, Dylan Redwine, during a court-ordered Thanksgiving holiday visit in 2012. (Jerry McBride/Durango Herald) 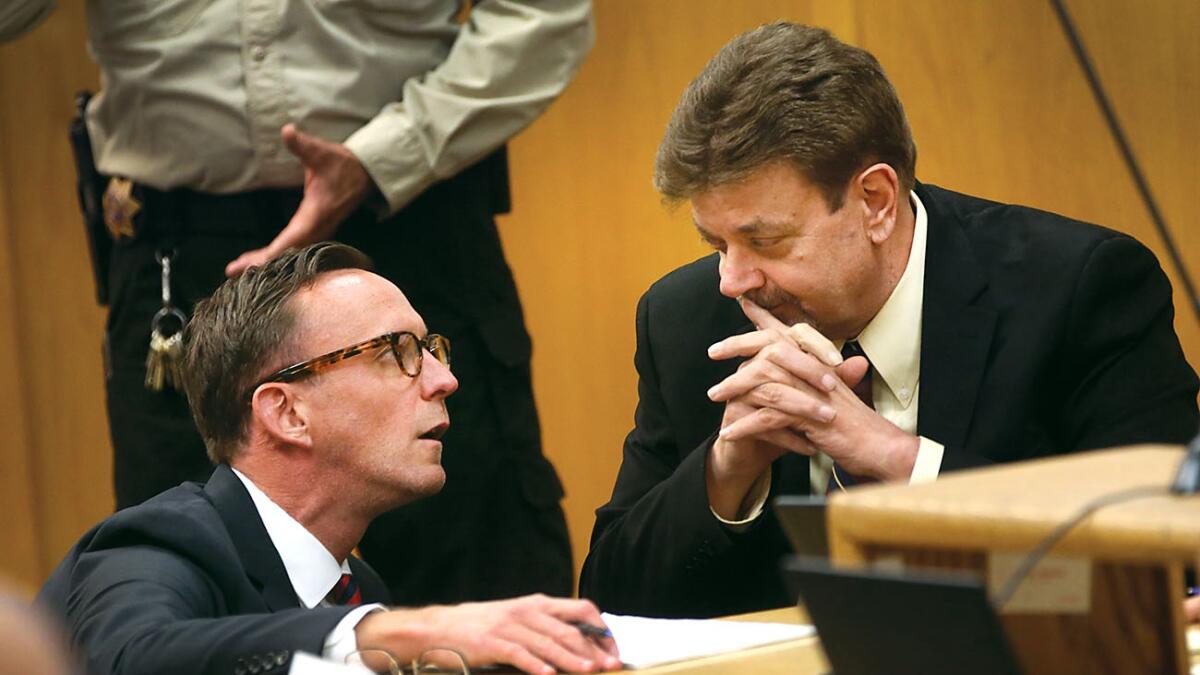 Interpreting the marks left on the skull of 13-year-old Dylan Redwine proved central to opening statements Monday in the long-delayed trial of Mark Redwine, who is charged with second-degree murder of his son during a 2012 Thanksgiving Day visit to Vallectio.

Prosecutor Fred Johnson, a special district attorney with the 20th Judicial District in Boulder, said fractures on the skull showed clear evidence of blunt-force trauma leading to the boy’s death, and, additionally, other smaller cut marks on the skull look as if it was tampered with using human tools.

Sordid photographs Dylan discovered on Redwine’s computer showing his father consuming fecal matter from a diaper while dressed in women’s underwear, Johnson said, were the trigger that sent Redwine into a rage that led him to kill his son.

Defense attorney John Moran said the marks left on the skull were more likely left by a bear or a mountain lion, and they show an animal attack is the most likely explanation leading to the boy’s death

Redwine, 59, is charged with second-degree murder and child abuse resulting in in Dylan’s death.

The boy disappeared from his father’s Vallecito home in 2012, during a court-ordered custody visit over the Thanksgiving holiday.

Dylan was reported missing on Nov. 19, 2012. His disappearance prompted an extensive search, but it was not until June 2013 that the first set of remains were discovered on Middle Mountain Road, 8.6 miles from Redwine’s house.

The boy’s skull was not discovered until November 2015, more than two years after the initial discovery of remains in 2013. The skull was located by hikers about 5 miles from where the remains in June 2013 were discovered. 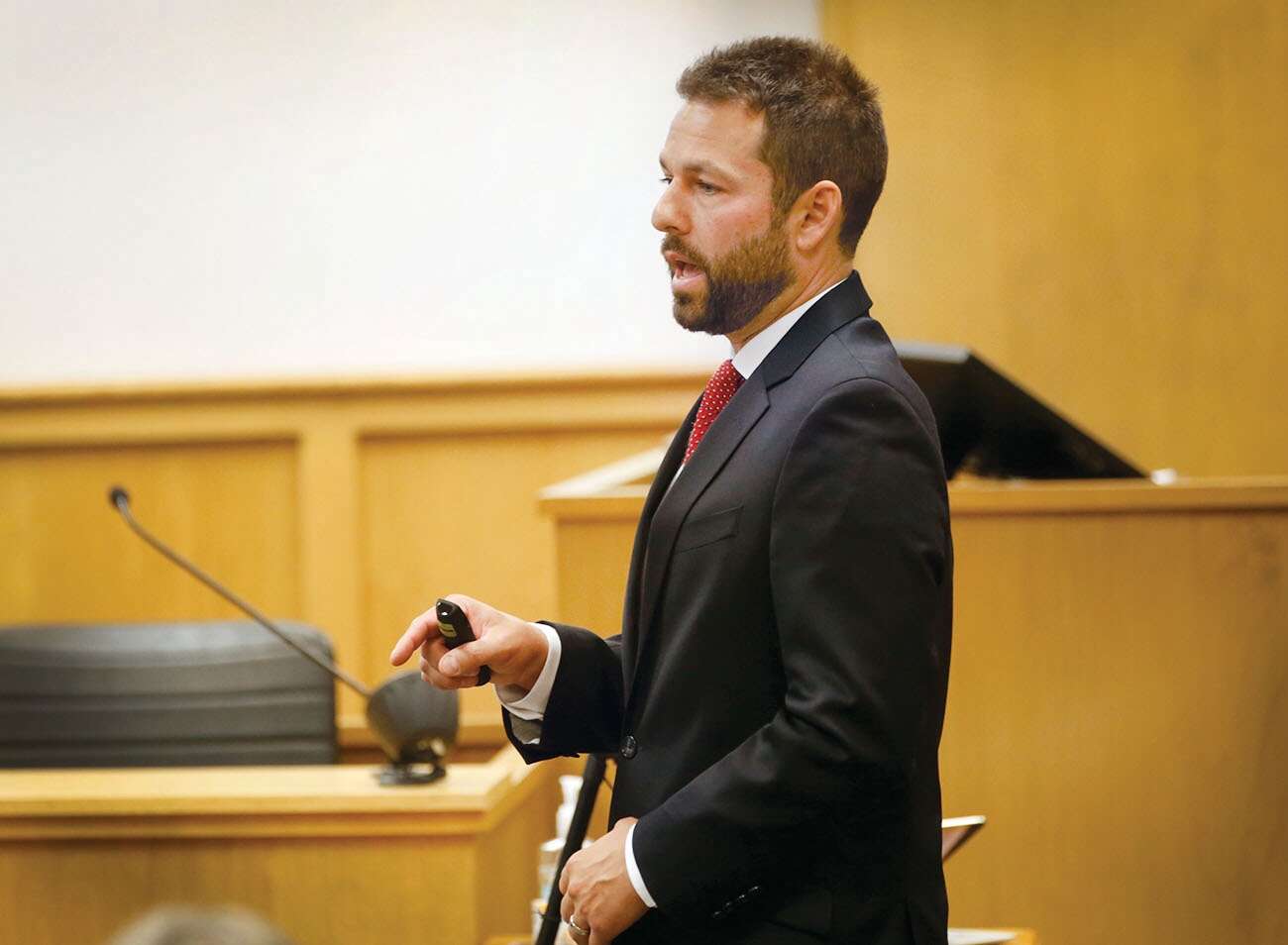 Prosecutor Fred Johnson said sordid photographs Dylan discovered on Mark Redwine’s computer led him to kill his son, Dylan, during a court-ordered Thanksgiving holiday visit in 2012. Redwine is on trial for second-degree murder and child abuse resulting in the death. (Jerry McBride/Durango Herald) 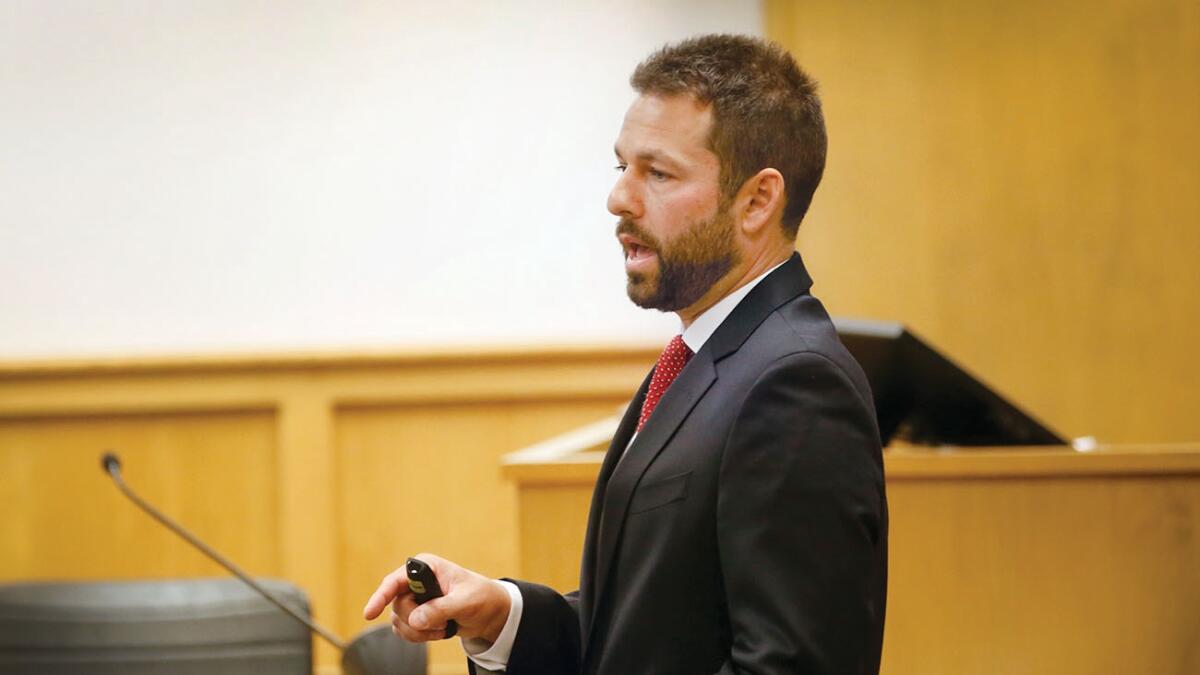 Johnson maintained the discovery of the skull miles from the other remains showed an effort by Redwine to hide the remains and use animal scavenging to hide his crime. He added that wildlife experts will say it is unusual for the skull to be located so far from other remains if indeed Dylan had been killed by a mountain lion or a bear.

Moran said the skull was found in a coyote den, and in the course of time, animals would have moved items on which they feed.

Moran said the photos from “deep within” Redwine’s personal life were unsettling and have been revealed on national television, but he said the troubling photos were not enough to lead a father to kill his son.

Instead, Moran said, Dylan, already alienated from his father, likely left the house as early as he could on Nov. 19. Moran noted Dylan planned to meet a friend at 6:30 a.m. But instead of arriving at his friend’s house he was attacked and killed by animals.

“Mr. Redwine is a flawed individual, but Dylan had agency. Dylan took off,” Moran told the jury.

The case prompted extensive national coverage with Redwine and his former wife, Elaine Hall, appearing on the “Dr. Phil” television show and details about the case were featured numerous times by television legal analyst Nancy Grace.

The trial, which began with jury selection last week after multiple delays, is expected to continue through late July or early August. Testimony will begin Tuesday.

Sixteen people, 11 men and five women have been seated on the jury. Four of the jurors will serve as alternates.

Johnson suggested that Dylan may have mentioned or shown the photographs to his father on the night he was killed.

“A damaged relationship, exposed with compromising photographs, photographs in the hands of a 13-year-old who is disgusted by it, which triggered a violent rage in the defendant,” Johnson said, explained the death.

The prosecution, Johnson said, will show Dylan knew about the photographs and that the images made him uncomfortable to be around his father. 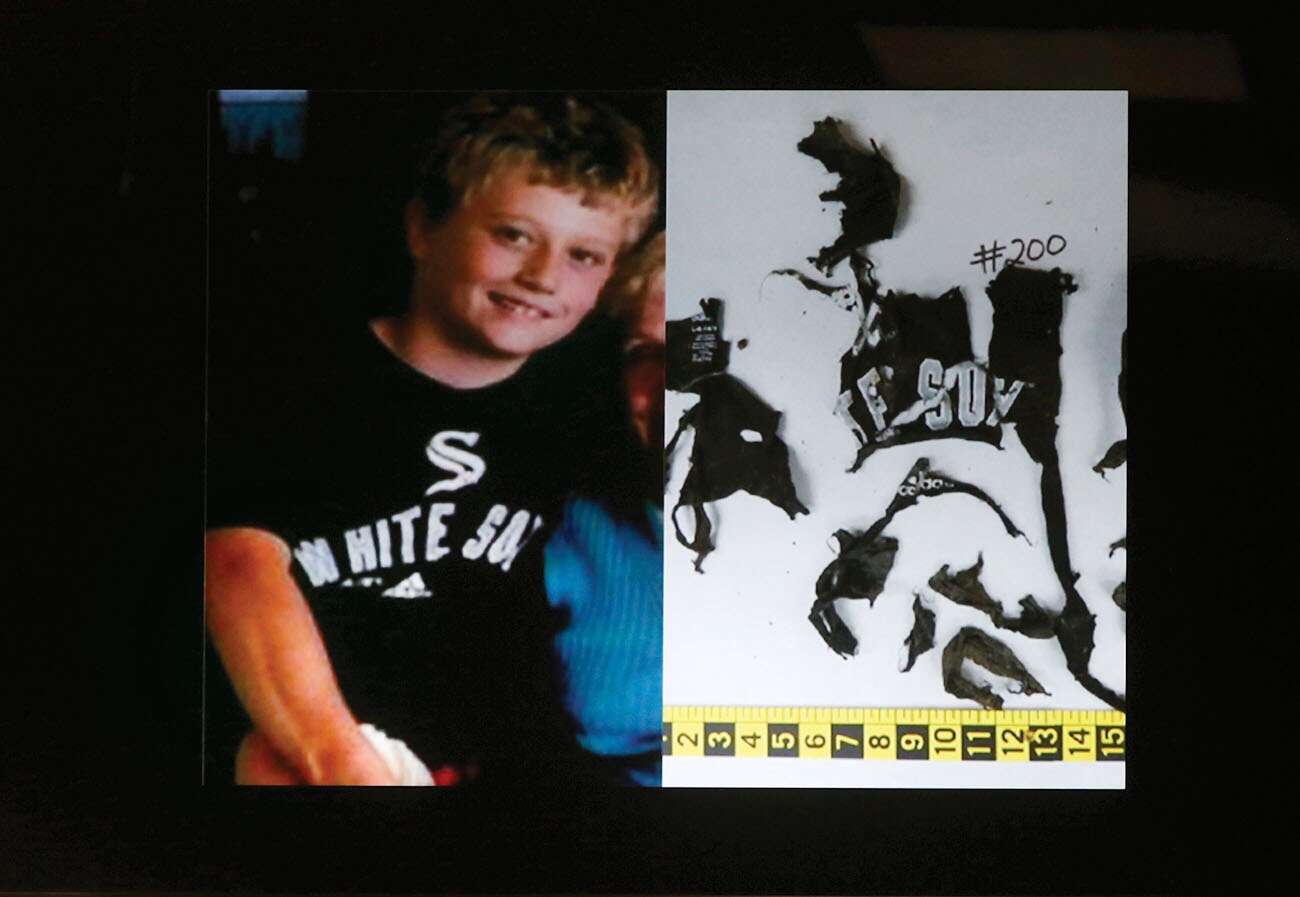 A photograph presented during opening statements in Mark Redwine’s trial Monday at the La Plata County Courthouse in Durango. Redwine is on trial for second-degree murder and child abuse resulting in death of his son, Dylan, in November 2012. (Jerry McBride/Durango Herald) 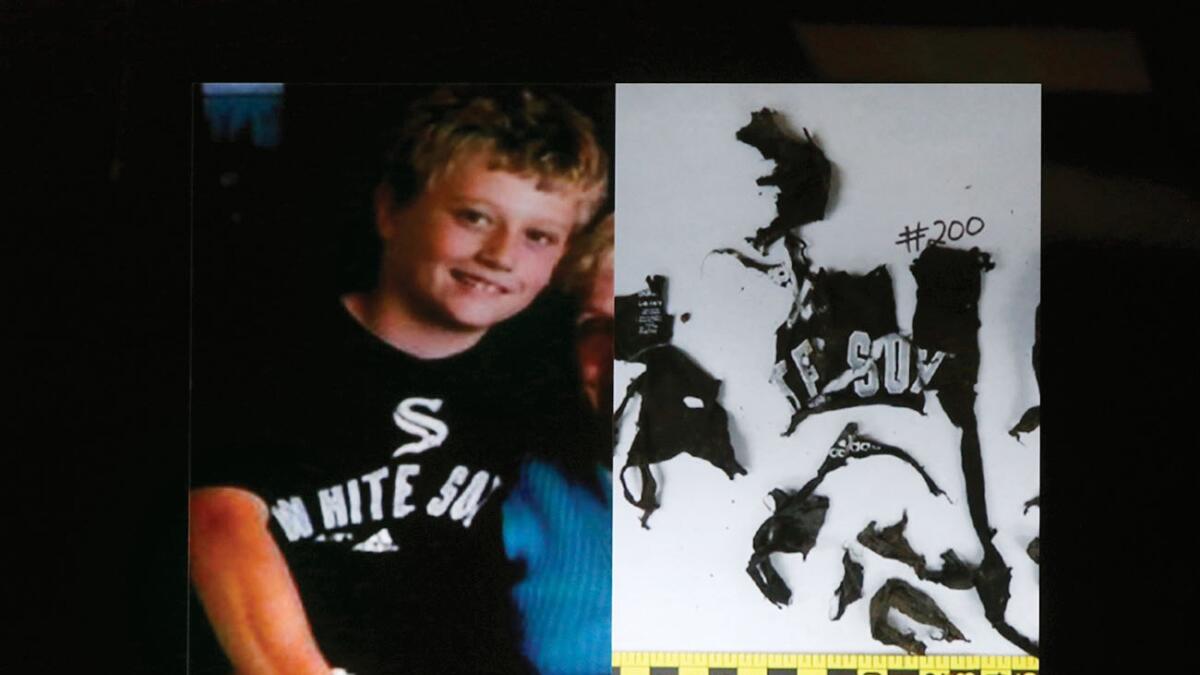 But Moran said Dylan had previously confronted his father about the photos during a cross-country trip in which Redwine and Dylan watched Major League Baseball games. Redwine had plenty of opportunity to kill Dylan “in the wide open spaces” that could be found from Vallecitio to Boston, the route of the father-son baseball road trip, he said.

Moran said the idea that the photographs served as motive for the killing stemmed from social media speculation by “Facebook vigilantes.”

Prosecutors will not be able to prove a connection between Dylan’s death and the photographs, Moran said.

“Mr. Redwine did not kill his child,” Moran said.

Blood was discovered in Redwine’s living room, and Johnson said DNA testing revealed one of the living room locations, in a cushion of a love seat, could be linked only to Dylan.

Moran said the amount of blood that investigators found in Redwine’s living room was so small it was likely to have been left from normal activity of a 13-year-old boy who played baseball and football and went fishing.

Much of the DNA evidence could have come from saliva or dandruff, left behind by humans everyday, Moran said.

Evidence that will be presented by the prosecution from human-remains tracking dogs cannot be relied upon, Moran said. The dogs, he said, hit on numerous false positives.

The dog-based evidence was “the most falsified” evidence that would be presented in the case, Moran said. He called the use of dogs in the search “junk science.”