Ancient Bird Skull has Similar Features with a T.Rex, Unearthed in China


A team of researchers has unearthed a 120-million-year-old partial fossil of a tiny ancient bird that has preserved skills of a mix of dinosaurian and bird features in China.

The 2-centimeter long skull of the fossilized ancient bird discovered by researchers from the Institute of Vertebrate Paleontology and Paleoanthropology of the Chinse Academy of Sciences shares numerous functional and structural features with the apex predator, the Tyrannosaurus rex. This indicates that ancient birds have kept numerous features from their dinosaurian ancestors with skulls that function more like dinosaurs than the living birds of today. 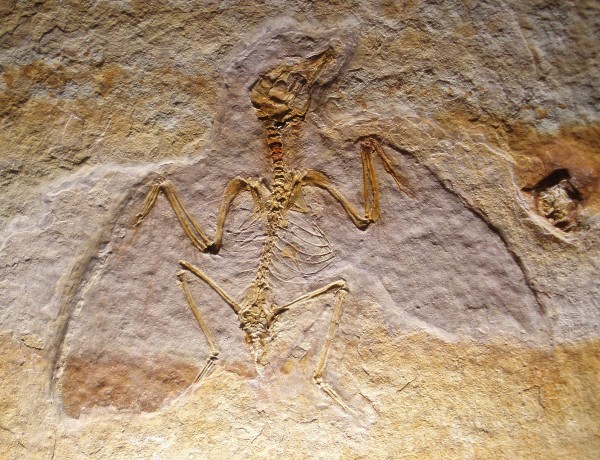 The Tyrannosaurus Rex or T.Rex was a carnivorous prehistoric animal that was built to be the apex predator of its time. Dubbed as the ‘King of the tyrant lizards’ according to National Geographic can grow up to 40 feet long and roughly 12 feet tall, weighing approximately between 5.5 -8 tons.

The T.rex is one of the most ferocious predators that have ever walked the planet. Its massive body, powerful jaws, and sharp teeth could easily crush a car. The apex predator once dominated the forested river valleys of western North America in the late Cretaceous period, around 68 million years ago.

Despite the ferociousness and dominance of the Tyrannosaurus Rex, it was no match for the mass extinction event that killed roughly three-quarters of all life on Earth about 66 million years ago that brought the end of the Cretaceous period.

A study published in the journal Nature Communications, entitled « Cretaceous bird with dinosaur skull sheds light on avian cranial evolution » used detailed reconstruction of the ancient bird’s family tree. Researchers demonstrated that the new fossils of the ancient bid species in China belong to an extinct group of avians called Enantiornithines or « opposite birds ». This group is the most diverse avian group from the time of the dinosaurs and has been found all over the globe.

Contrary to current living birds, the skull of the newly unearthed ‘opposite bird’ and T.rex are not kinetic, instead, the bones are ‘locked’ and unable to move. The temporal regions of the bird skull are significantly different from living birds. The new species is found to have 2 bony archers as jaw muscle attachments like those found in alligators, lizards, and dinosaurs, making the rear of its skull rigging and resistant to movement reports Phys.Org.

Additionally, the team of researchers discovered and meticulously preserved the anatomy of the species to help reinforce well-supported contentions, that birds are not only living dinosaurs but have evolved from the same branch as their dinosaurian ancestors including dromaeosaurs and troodontids. Dr. Min Wang a researcher from the Key Laboratory of Vertebrate Evolution and Human Origins explains that despite the enantiornithines having dinosaur skulls on a bird’s body, it was not enough to hinder their success in places all across the globe tens of millions of years during the Cretaceous era.

RELATED STORY: Last Dinosaur Footprints from 110 Million Years Ago Unearthed on Cliffs and Coast at Folkestone

Check out more news and information on Paleontology in Science Times.